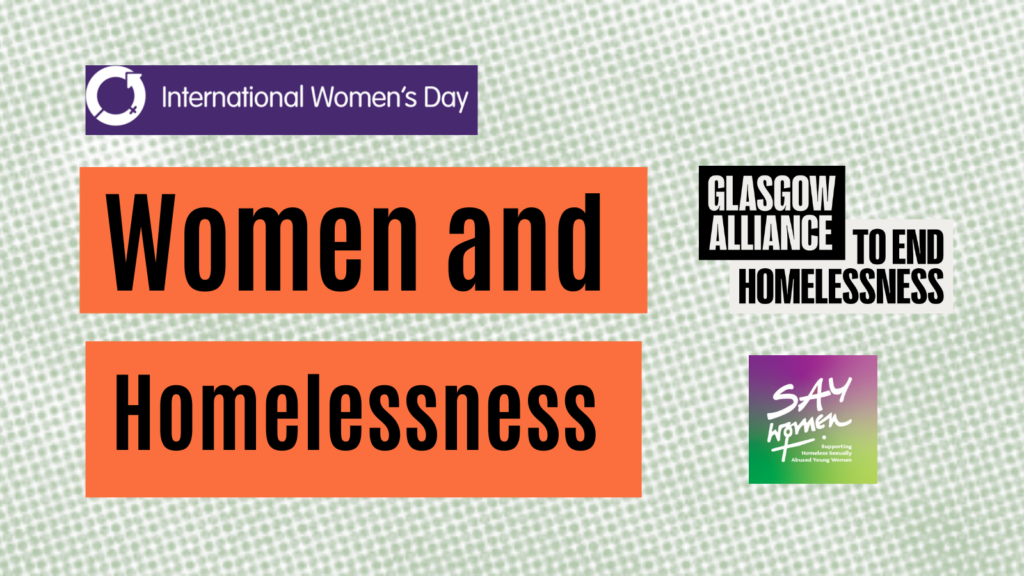 To mark International Women’s Day (Tuesday 8 March), the Alliance and SAY Women partnered on a digital event on the experiences of women and homelessness. In this blog, SAY Women’s Training Manager, Erin Crombie shares a snapshot of women’s experiences of homelessness in Scotland.

SAY Women has been working to support homeless young women since the early nineties, having been established in response to a piece of research which revealed a stark reality about the incidence of homelessness for women. The CHAR report found that 4 in 10 young women who were homeless had become so due to having been subjected to sexual abuse early in life.

Abuse is endemic in women’s homelessness. This is widely recognised, and when asked about the key drivers of homelessness for women most people reflexively respond with a salient answer: domestic abuse. The question brings to mind the common picture of the wife and mother, forced to abandon much of what is hers, uprooting her life and taking a leap of faith, often with the support of a Women’s Aid service, though sometimes without. We know what she looks like on the surface and we may know what the obstacles have been for her.

But the picture of women’s homelessness is not quite so simple. In Scotland in 2021, the 16-24 age bracket represented the second highest number of homeless women that year, with the highest being the 25 – 34 age bracket (3901 and 4595, respectively – significantly, in both these age brackets more women were identified as homeless than men). A proportion of these women will be in the unfortunate position of fleeing domestically abusive homes and partners, but what other experiences are going on that are less widely recognised? The face of women’s homelessness is not reducible to one story.

What is indicated by the CHAR report (and is understood to continue to be relevant based on more recent research), is that other forms of gender-based abuse contributes significantly to women’s homelessness. Sexual abuse and other forms of gendered violence and abuse cause homelessness for women – with young women having to leave the family home due to disclosure of abuse; the development of problems in relationships due to behaviours that seeks to resolve posttraumatic symptoms like alcohol and drug use; the way in which sexual victimisation creates heightened vulnerability to further victimisation, rendering survivors with particularly risks to their housing status due to exploitation by abusers. Add to this an intersectional lens and we can see other gendered factors for particular demographics of women that create risk factors for homelessness – being a member of the LGBT community at risk of familial rejection, being at risk of honour based violence, or being a lone mother below the age of 25 who, under the UC family model, receive lower benefits.

At SAY Women we work to raise understanding and awareness of the gendered dynamics of homelessness and housing instability with a view of improving services’ ability to more effectively support women.

International Women’s Day takes place on Tuesday 8 March, and is themed #BreakTheBias for a world that is diverse, equitable and inclusive. IWD is a global event celebrating the social, economic, cultural and political achievements of women. The day also marks a call to action for accelerating women’s equality.